The medieval Town Hall on the main square, just a stone’s throw from the beautiful church of St Mary (Mariakyrkan), now houses Åhus Museum. Boats and restaurants crowd the waterfront along the busy harbour promenade. Close by are the ruins of the old castle, Aosehus.

Åhus was long known as a “source of three Swedish sins” – snuff, schnapps and a surfeit of eels. The centuries-old tradition of eel fishing is still very much alive along the coast here and in the old eel huts. For many years the area was also famous for its tobacco fields and the manufacture of the “Åhus Havana” cigar. In the late 1800s there was hardly a single family in Åhus that didn’t have its own miniature tobacco plantation. The last tobacco in Åhus and Yngsjö was harvested in the autumn of 1964.

Schnapps, on the other hand, is still produced in Åhus! Although the Absolut Company is now owned by French interests, the Absolut vodka for which it is famous continues to be produced in Åhus. During the summer months visitors can find out all about the history of this worldwide success in the Absolut Showroom in the centre of Åhus.

Explore Åhus at your own pace with the Visitor’s Guide (The locations are marked on the map):

Åhus was granted town privileges in 1299. These were good times for Åhus. The town was flourishing and the Black Friars of the Dominican Order built a monastery here that acquired a reputation as Scandinavia’s first “university”.

Recent evidence also points to the fact that it was the Viking king, Knut Svensson (better known in English as Canute the Great), who built the town’s fortress, Aose Castle. At the time Åhus was important enough to be marked on the maps in the Pope’s palace in Rome, and the bustling town was the destination for traders from far and wide. In 1617, however, following the foundation of Kristianstad, Åhus lost its town privileges and three centuries of greatness came to an end. King Christian IV ordered tradesmen and even some buildings from Åhus to be moved to the new town that bore his name. Åhus enjoyed a new lease of life with the arrival of the railway in the late 1800s.

Now its fame rested on eels, with an “Eel King” who delivered eels to the Swedish Royal Court, and on locally grown tobacco, with a “Cigar King” whose workers rolled a million cigars a year. By the turn of the century fully booked trains were also bringing hundreds of visitors to the beach at Täppetstranden, where men and women bathed naked in the water, and in the early 1900s the factory whistle sounded for the first time in the new distillery. Today Åhus is an “absolute” dream setting for around 10,000 permanent residents and at least as many summer visitors. Long sandy beaches, an excellent visitors’ marina and a medieval town centre with a host of interesting historical relics and monuments attract tourists from both Sweden and further afield.

Åhus has also established a reputation as a centre for art and design and is home to a number of talented young artists and designers. So, welcome to Åhus – and to a self-guided tour of the town.

It was here around the market place, now the main square, that it all began. The square has always been a meeting place for the residents of Åhus, a centre for trade, the focus of celebrations, and a place where collective decisions were reached and rumours were spread. In the north-west corner of the square stands Saint Mary’s Church. This is the oldest building still in use in Åhus. It is thought that the church was first built in the second half of the 1100s and subsequently renovated in the 1200s, using Lund Cathedral as a model for the work. There have since been several extensions to the church. Take a look inside and feel the presence of history.

Walking west, beyond the church, you will arrive at the main road (Route 118) and the roundabout at the southern end of the town. To the north of the roundabout is Anders Håkan’s Farmhouse, today the site of the local history museum managed by Saint Anna’s Guild, the local history society here in Åhus. About three quarters of the way anti-clockwise around the roundabout are two buildings that recall two of the old trades for which Åhus was once famous. These are the old Rope Factory, the last traditional ropewalk in Sweden when it closed in 1966, and the Tobacco Barn. In the late 1800s and early 1900s most of the residents of Åhus had their own small patch of land where they grew tobacco. The leaves were then dried in barns and sold to Per Svensson,the “Cigar King”, who rolled “Åhus havanas” here until the industry was nationalised.

More or less where you are now standing used to be the site of the West Gate with a well-guarded drawbridge that led into the town. Parallel with the main road you can see the remains of the Town Wall that once encircled much of Åhus. It is considered to be Sweden’s best preserved medieval town wall after Visby on the island of Gotland.

Let us now retrace our steps back to the main square. On the northern side of the square you can see the old Town Hall, today a museum. It is impossible to say with certainty whether the building ever actually served as a town hall, but even so it is definitely worth a visit.

To the south you will see a rather unusual-looking, two-storey wooden building known Otto Ol’s House or Lina’s Bakery. It was originally built by a local customs officer, and the first baker moved in early in the 1800s. If you now walk eastwards towards the little path that leads to the street called Köpmannagatan you will easily spot the ruins of Saint Anna’s Hospital. Claus Denne, a Dane who dedicated his life to caring for the sick and homeless, founded a hospital here in 1524, together with a home for the old and infirm, and a hostel for travellers. There was also a small chapel, although Denne’s charitable work was not actually financed by the church. These activities all came to a close, however, 100 years later when Åhus lost its town privileges.

On the opposite side of the pathway is a small and rather unremarkable-looking half-timbered cottage. However, Sweden’s King Karl XI (1655–1697) owed his life to the generously proportioned fireplace and chimney inside. During the wars with Denmark a quick-witted local priest told the king to hide above the damper in the chimney to escape from the Danes who were hunting him down. Since then the cottage has been known as the King’s Cottage.

A little way further to the east is the remarkable stone sarcophagus. This was originally part of the cargo on a ship that foundered off the coast here in the 1700s and is often linked to the legend of the Princess from the Sea. It is said that those dwelling on the coast deliberately lured the ship to its doom.

Now turn right towards the river and Gamla Skeppsbron. Here are the remains of what may have been the first university in all of Scandinavia, the Dominican Friary Ruins. Until the Reformation this was a prominent seat of learning and a cradle of culture, but in 1537 the crown assumed control of the monastery, and later many of the stones with which it was built were used to help build the new model town of Kristianstad.

A little distance upriver is the Old Äspet Bridge, a swing bridge built in 1908 to replace the boat that had previously ferried people across the river. There was a toll for the new bridge and a ticket booth where the watchman collected the 5 öre fee for the return journey. Just beyond the bridge is Mölleholmen a collection of small islets. Erik Dahlbergh tried to build a dam here during the war with Denmark in the hope that Kristianstad, some kilometres upriver, would be flooded. The attempt failed, however, as the current was too strong. Today Gamla Skeppsbron is a popular mooring for boats in the summer, their masts swaying and their halyards rattling.

Along the pleasant Harbour Promenade are a number of waterfront restaurants – and the famous icecream boats! The Gästgivaregården Inn close by the bridge is by far the oldest of these establishments; its origins stretch back all the way to the 1700s. The harbour is dominated by the distillery owned by The Absolut Company. This is the only place in the world where Absolut vodka is produced. The enormous international success this drink now enjoys is the climax to a story that began with Lars Olsson, a poor farmer’s lad from Kiaby, and which, thanks to some very clever American marketing in the 1980s, has transformed vodka from Åhus into one of the world’s best known brands. The distillery’s distinctive clock tower has earned it the local nickname of “The Church of the Spirits”.

A little closer to the port of Åhus, in the shadows of the huge grain silos, are the ruins of Aose Castle. This fortress, probably built back in the eleventh century, once stood on an island, protected by a high wall and a moat spanned by a drawbridge. It was destroyed in 1569 by Duke Karl, later to become King Karl IX of Sweden, and the ruins were gradually covered by drifting sand before being excavated in the late 1800s. It has always been widely assumed that the castle was built on the orders of Archbishop Eskil, but recent excavations have revealed new evidence that suggests that Canute the Great, King of Denmark and England, was the first lord of Aose Castle.

On the other side of the harbour lies Kronoskogen Forest, a nature reserve in the heart of the town and what may well be the last remaining habitat in Scandinavia of the flatheaded pine borer beetle. Further out is the bird lagoon with an observation tower from which you can study the constant comings and goings of the waders.

If you prefer to study bathers instead, follow the coast south to Äspetstranden Beach. From here kilometre after kilometre of glorious white sands stretch all the way to the dog beach and the naturist beach at Yngsjö and beyond. When the day finally begins to draw to a close and the bathers have gone home, one by one the paraffin lamps are lit in the eel huts along the Eel Coast and the tables are set for a feast.

Åhus has long been a centre for eel fishing, and today the enjoyment of catching and eating eels still remains a vibrant part of the local culture. North of the port of Åhus is Täppetstranden Beach with a bathing jetty and open-air pool, pizzerias and restaurants, a conference hotel, camping site and mini-golf. Täppetstranden is also famous for attracting the beach volleyball and beach soccer sporting elite, and there is plenty to see and do here long into the summer nights 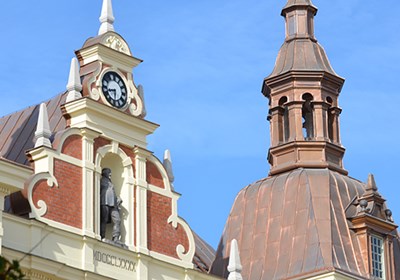 Kristianstad was founded in 1614 by King Christian IV of Denmark. The city was initially built as a fortress, surrounded by wetlands that provided a natural defence.